The use of Monarch programming has become a mainstay now in North American society. Brought over and developed by the Nazi’s we are seeing it manifested right before our eyes.

Aleister Crowley taught that when the age of Horus would finally emerge, the whole concept of immorality and sin would be engulfed in the flames of the New Aeon.  His desire to legally have sex with children would finally be acceptable.  Hay, as a disciple of Crowley’s teachings, and as member of his O.T.O, would have loved to see pedophilia decriminalized.

Harry Hay was a lifetime advocate of North American Man-Boy Love Association and even marched with NAMBLA in gay-pride parades. As a disciple of Aleister Crowley’s, Hay went so far as to march with the man boy sex association with a “NAMBLA” placard emblazoned over his body. In 1994, Hay refused to march in a gay-parade in New York, because they forbad NAMBLA to march with them. Hay joined another gay parade that year because they allowed NAMBLA’s agenda.

Attitudes about sex in America underwent drastic change because of a researcher named Alfred Kinsey.  he was also influenced by Aleister Crowley?

According to Wardell Pomeroy, who was the coauthor of Kinsey’s sex reports, Kinsey not only loved Crowley’s perverse homosexual writings, but also went to Crowley’s former sex temple in Italy, called the Abbey of Thelema, to obtain Crowley’s sex diaries.  We reveal in our video The Kinsey Syndrome, that Crowley had been working with a number of pedophiles, who he instructed to keep sex diaries, documenting the details about how children were reacting to being molested.  This is how Kinsey was able to record data in his sex reports with children and babies as young as a few months old.  Whether Kinsey had employed Crowley, who was struggling financially in his latter years, to record a sex diary for him, or Kinsey just happened to know he had a sex diary, and where to find it, is unknown.  Either way, such behavior is unbelievably wicked, and is one of the reasons Crowley was called by the press of his day, “The Wickedest Man on Earth.”

Sex magick was a way through keeping journals and also starting the sex abuse before the age of 2 yearsold ( some as young as a few months old) to provide the perfect mind control victims.

Kenneth Anger was making films promoting homosexuality long before Hollywood followed suit. Most of his movies push homosexuality, Satanism/occultism or both.  He is a follower of the teachings of Aleister Crowley, and like Harry Hay, a member of the O.T.O.  In his movie Lucifer Rising, Anger cast his live-in boyfriend, Robert Beausoleil, who would end up committing the first documented murder for Charles Manson, as Lucifer.  The objective of the film was to show the influence of Crowley’s magick, causing the dark forces of Lucifer to rise. Kenneth Anger was also a cofounder of Anton LaVey’s Church of Satan, and he sports a huge tattoo that reads “LUCIFER” across his chest. Anger also wrote forewords for two of LaVey’s books, The Devil’s Notebook (1992) and Satan Speaks! (1998).  Anger was also a confidant of Alfred Kinsey’s and journeyed with him to Crowley’s sex temple in Italy to aquire Crowley’s sex diaries.

SO what has been the REAL AGENDA with Kenneth Anger?

Kenneth Anger went up against the obscenity laws and turned them over in California……is his new agenda to see pedophilia legalized In the United States?

Is this why for years he has legally gotten away with shamelessly promoting pedophilia in “Invocation of My demon Brother” with out being charged for it?

Any one else would have been sent to jail and charged with pedophilia….how does he get away with publicly playing this on you tube? 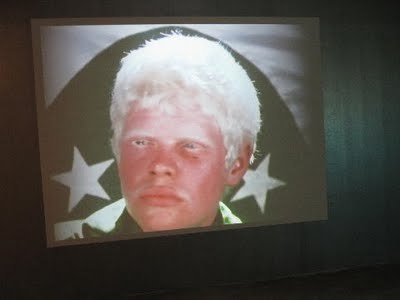 What is the real reason behind this push? is it really about Monarch programming our children into Satanic slavery?

Is sexual molestation and traumatization the root of training for Monarch programming?

It’s difficult to figure out who the original programmer of this satanic project was, due to the substantial amount of disinformation and cross-contamination propagated by the “powers that be.” The two that went by the color-coded name of Dr. Green are a Jewish doctor named Dr. Gruenbaum, who supposedly collaborated with the Nazis during WWII, and Dr. Josef Mengele, whose trademark of cold blooded and calculating brutality has not only scarred the souls of survivors from Auschwitz, but also a countless number of victims throughout the world. Mengele’s direct involvement at the infamous Auschwitz concentration camp was suspiciously downplayed during the Nuremberg Trials, and consequently no intensified effort by the U.S. and it’s allies was directed toward his capture. As a means to confuse serious investigators as to his whereabouts, U.S. officials would report Mengele being a non-threatening, recluse in Paraguay or Brazil, or that he was simply dead (the “Angel of Death” miraculously must have come back to life at least five different times).

His unprecedented research, at the expense of thousands of lives, undoubtedly was a significant bonus to U.S. interests, Besides using the pseudonym of Dr. Green, survivors knew him as Vaterchen (daddy), Schoner Josef (beautiful Joseph), David and Fairchild. A gracefully handsome man of slight stature, Mengele would disarm people with his gentle demeanor,while at other times, he would explode into violent rages. Other characteristics remembered by survivors were the cadence of his shiny black boots as he paced back and forth and his I-love-you/l-love-you-not” daisy game. When he pulled off the last daisy petal, he would maliciously torture and kill a small child in front of the other child he was programming. Distraught survivors also recalled being thrown naked into cages with monkeys, who were trained to viciously abuse them. Evidently, Mengele enjoyed reducing people to the level of animals. He also would purposely restrain his victims from crying, screaming, or showing any excessive emotion.

Mengele’s “methods” are today, very much with us! This is precisely why Nazi Hunters and The Hague may be required to investigate U.S. government programs over the past 50 years. His legacy of turning children into objects for the state lives on.

Dr. D. Ewen Cameron, also known as Dr. White, was the former head of the Canadian, American and World Psychiatric Associations. Because of Cameron’s extensive experience and credentials, the ClA’s Allen Dulles funneled millions of dollars throughout organizations like the society for the Investigation of Human Ecology, which Cameron ruthlessly presided
over. Experimentations were conducted at several locations in Montreal, mostly at McGill University, St Mary’s Hospital and Allan Memorial Institute.
Besides the conventional methods of psychiatric tyranny, such as electroshock drug injections and lobotomies, Cameron conceived the technique of “psychic driving,” wherein unsuspecting patients were kept in a drug induced coma for several weeks and administered a regimen of electroshocks, while electronic helmets were strapped to their heads and repetitive auditory messages were transmitted at variable speeds.[15]
Many of those exploited were abused children which had been run through the Roman Catholic orphanage system. Not surprisingly, Dr Cameron has been conveniently left out of most psychiatric journals. This may have been, in fact, largely due to Project MKULTRA being publicly exposed in 1970, through lawsuits filed by Canadian survivors and their families. The CIA and Canadian government settled out of court so as not to be required to officially admit to any wrongdoing.
A former U.S. Army Lt. Col. in the DIA’s Psychological Warfare Division, Michael Aquino, is the latest in a line of alleged government-sponsored sadists. Aquino, an eccentric genius, founded the Temple of Set, an offshoot of Anton LaVey’s Church of Satan. His obsession with Nazi pagan rituals and his hypnotic manipulation of people made him an ideal candidate for the position of “Master Programmer.” Aquino was connected with the Presidio Army Base day care scandal, in which he was accused child molestation. Much to the dismay of the young victims’ parents, all charges were dismissed. Code-named “Malcolm”, Aquino developed training tapes on how to create a MONARCH slave and worked as a liaison between Government/Military Intelligence and various criminal organizations and occult groups in the distribution of MONARCH slaves.[16]

Heinrich Mueller was another important programmer who went under the code names “Dr. Blue” or “Gog.” He apparently has two sons who have carried on the trade. The original “Dr. Black” was apparently Leo Wheeler, the nephew of deceased General Ear1e G. Wheeler, who was the commander of the Joint Chiefs of Staffs during the Vietnam War. Wheeler’s protege, E. Hummel is active in the Northwest, along with W. Bowers (from the Rothschild bloodline).
Other alleged master mind manipulators, past and present, are: Dr. Sydney Gottleib, Lt. Col John Alexander, Richard Dabney Anderson (USN), Dr. James Monroe, Dr. John Lilly, Lt. Comdr. Thomas Narut, Dr William Jennings Bryan, Dr. Bernard L. Diamond, Dr. Martin T. Orne, Dr. Louis J. West, Dr Robert J. Lifton, Dr. Harris Isbel and Col. Wilson Green In order to keep MKULTRA from being easily detected, the CLA segmented its subprojects into specialized fields of research and development at universities, prisons, private laboratories and hospitals Of course, they were rewarded generously with government grants and miscellaneous funding.

SO was the multiple Agenda of the Zodiac and these unsolved cold cases to promote an Agenda of a Luciferian world order. One that needed to sell drugs like Cocaine , heroin and LSD etc in a huge underground Allegiance?

Using Fear to generate the beginning of a fascist government that eventually will be under martial Law with the military in full control as a Police state…..if you talk to people who have lived in fascist regimes they would believe it. If you try to tell the average Joe in North America he will accuse you of conspiracy theories. Even though this is well documented and the CIA has even hidden and destroyed large amounts of documentation.

One that would use traumitization as a form of programming to create sex  magick induced sex trafficking slaves and also work  slaves? Every day beautiful young men and women are going missing…everyday children going missing???

We as a nation need to ask ourselves who is more important our children or the uncontrollable lust of a few powerful men in high positions.

I personally believe children have a right to there innocence. I see this as no different than the poor African children who are forced into being child soldiers. Why is this allowed to go on in our country seemingly with no justice? and how do People like Kenneth Anger get away with it????