Posted on December 19, 2013 by themanyfacesofthezodiac

I first came across this mural some years ago when reading ‘The Templar Revelation’ by Lynn Picknett and Clive Prince.  A small black and white photo was included in the plates section, clearly depicting a dark sun at the crucifixion of Christ.  This mural was created by the artist and esoterist Jean Cocteau, and it can be found in the church of Notre-Dame de France in London.  I was recently contacted by a member of a Rosicrucian Freemasons Lodge, who sent me this picture and has kindly given me permission to reproduce it here (19).  He described some of the more heretical aspects of the work:

“See the ‘Black Sun’ of the alchemists? The Rose of the Rosicrucians is at the foot of the (rose-)cross. The figure on the extreme right has the ‘fish’ symbol of Christ on his eye (the photo is cropped), indicating that he is Jesus. Hold on a minute then – if that is Jesus looking on at the crucifixion, who is that on the cross? Cocteau himself looks away in disgust from the travesty of the accepted version of the crucifixion. Lots of other symbolism in the mural, but that’s another story. He was an independent Rosicrucian, as many in France are. Not a member of the fictitious ‘Priory of Sion’, as the new age fantasists and delusionaries will have it, and not a member of the SRIA either.”

One might speculate that there is also some secret knowledge about a dark star shown here, seen in the sky during the life of Christ (note how both his birth and death are depicted on the altar and mural respectively…). Nibiru? It’s a possibility that cannot be ruled out, although clearly its appearance cannot have been quite as spectacular as M. Cocteau is alluding to on his mural. Instead, Nibiru must have been a barely detectable object seen only by, well, Magi… 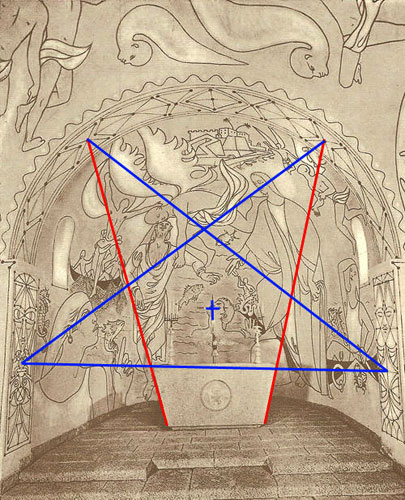